Roger had SABR. Novak had SABADJ. Djokovic’s tactical genius at US Open final

–During a hot humid early August in Montreal, many wondered why Novak Djokovic was tiring himself out playing doubles with his pal Jarko Tipsarevic as well as singles at the Rogers Cup.

Djokovic might be the best hard-court singles player ever but he’s nothing special in doubles. He’s not known for serving-and-volleying, and he’s much more comfortable covering wings behind the baseline than coming forward to charge the net or put away short balls.

Djokovic not only lost doubles in Montreal, he was too fatigued to go into a higher gear against Andy Murray in the singles final. Playing both looked like a tactical error, at that time.

Fast-forward a month later, it seems to makes sense.

Was Djokovic trying to improve his net game in order to surprise Roger Federer?

If so, he kept it hidden during his loss to Federer in the Southern and Western Open final in Mason, Ohio near Cincinnati. 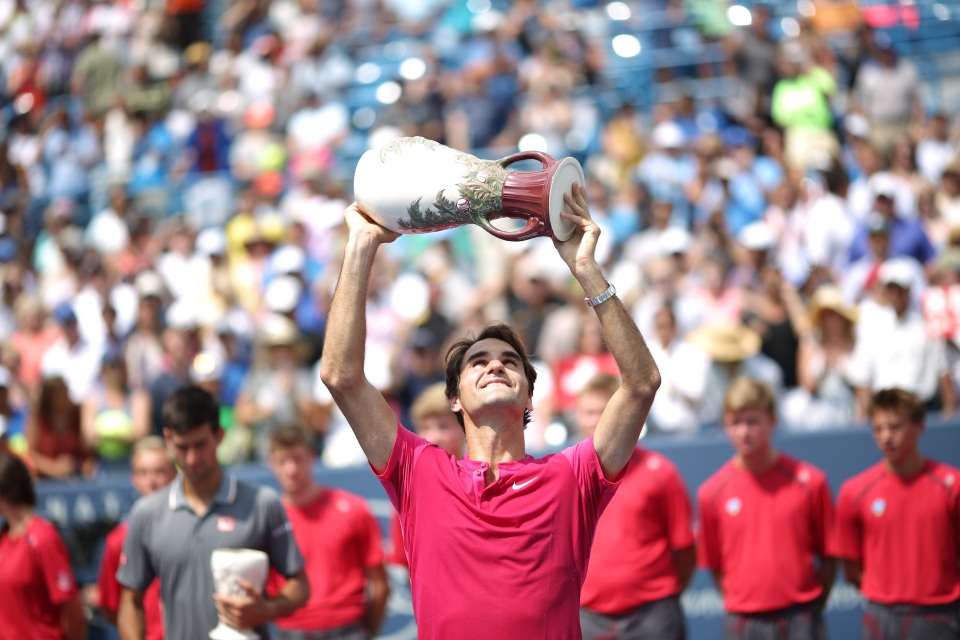 In the US Open final, Djokovic unleashed the surprise and found success coming forward. He hit sharp volleys and crushing overheads. He looked more like vintage Federer than did Federer, who uncharacteristically netted many volleys and half-volleys or played them too short.

Djokovic won 21 of 32 net points, the same percentage as the much more experienced volleyer Federer, who was 39 of 59.

It was a brilliant chess move.

Federer seemed surprise by Djokovic’s new tactic, and he couldn’t answer. Roger isn’t used to hitting passing shots, because he’s usually playing offense, not defense, and rushing the net himself.

Djokovic, meanwhile, was prepared for Federer’s sneak attacks, and he hit lobs that had Federer opening his hand as if to say “What do I have to do to beat this guy?”

Chalk one up for Djokovic.

While his surprising net prowess possibly made the difference, Djokovic also won by his trademark consistency and resilience.

At every level, tennis by design favors the more consistent player who makes fewer errors, especially on the big points. Djokovic only won two more points than Federer the entire match — 147 to 145. But he made only 37 unforced errors to 54 by Roger.

Novak was more patient and disciplined, while Roger seemed trigger happy, going for too much too soon. Roger converted only 4 of 23 break points, compared with Novak’s match-winning higher ratio of 6 for 13.

Djokovic’s consistency frustrated Federer. Roger seemingly hit winner after winner, but they came back harder and suddenly Roger was on the defensive and no longer controlling the point or the middle of the court. Desperate to finish points sooner, Roger rushed the net on weak approaches and paid the price by watching Djokovic pass him on both sides.

With Roger at net, Novak brilliantly played first passing shots at his body, jamming Roger with few angle options and forcing him to volley back to Novak. Reading the play perfectly, Djokovic was waiting for this, and used his 2nd swing to pass Roger — now stranded at the net — down the line or cross court.

Failing at the net, Roger increasingly went for broke from the baseline — and missed forehands that he might normally make.

While it looks like Roger lost a match he had “on his racquet”, Djokovic deserves credit for another brilliant tactical move.

Somehow, Novak or his team have spotted a weakness in Roger’s baseline arsenal.

Novak repeatedly found success by hitting deep balls down the middle or a little to Federer’s left. This baited Federer into hitting runaround forehands. Without obvious angles to work with, Federer repeatedly misfired on inside-outs and inside-ins on crucial points.

From that awkward position, why didn’t Federer just play a safer forehand — or backhand — back down the middle to Djokovic?

Given the choice, Federer typically runs around to his forehand instead of hitting a backhand.

Federer doesn’t view his forehand as a defensive shot. It’s his biggest offensive weapon, and he’s eager to pull the trigger whenever he can, especially when he has angles to work with. Watch highlights of Federer dominating the world a decade ago, and you’ll see a superhero flying through the air and hitting heroic inside-outs at sick angles.

But Djokovic on Sunday played balls to where Federer has the worst possible angles.

If he uses his backhand, Roger can only return it down the middle or to Djokovic’s forehand (which Novak wants). This is because Federer can’t easily hit an inside-out backhand to Novak’s backhand wing. It’s an almost impossible shot for a one-hander, and even Novak and Andy Murray find this too difficult for their two-handers.

So, Roger tried to run-around to hit a forehand. Perhaps caught in two minds, he often seemed late running around or off-balance. With his head not still, Federer mishit that forehand inside-in at least twice — and they were both on crucial points. He also sailed inside-out forehands wide on other key points.

Djokovic baited him, and Federer took it.

Chalk up another one for Djokovic.

How good is Djokovic? He’s only one slam from matching the records of Bjorn Borg and Rod Laver. He’s also making Federer the best player ever not to win a slam for more than three years.

If he stays healthy and continues to improve his volleys, overheads and lobs, Djokovic might even surpass Federer’s record of 17 slams.

Will that be enough to win over the New York crowd?

The irony is this. Djokovic speaks many of New York’s languages including English, Spanish, Italian, French, Chinese, Serbian and its relatives. Yet fans even cheer his misses and yell out during serve tosses. If they study his genius more closely, they’ll realize he might be the greatest tactician ever in the game.