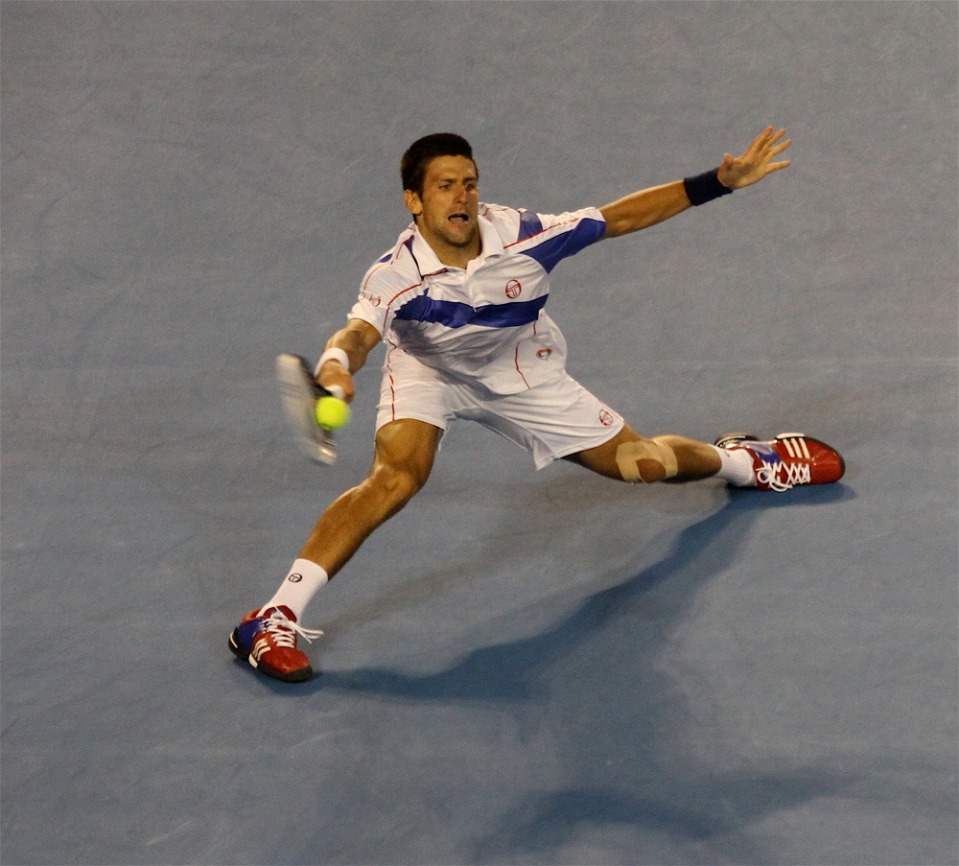 In another sport, say soccer or hockey, Novak Djokovic would be the world’s most popular player. He would be revered for his endurance, his fluency in five languages, and his will to overcome obstacles such as poverty and the downfall of Yugoslavia.

But Djokovic plays tennis in an era dominated by its two most lionized athletes: Roger Federer and Rafael Nadal. As a result, he’s one of the most unsung and under-rated champions in history, and he’s almost always playing finals before crowds cheering for Federer, Nadal or his pal Andy Murray. Even many longtime tennis fans and club-level players don’t realize that Djokovic’s now won seven grand slams and held the number one ranking for at least 101 weeks. 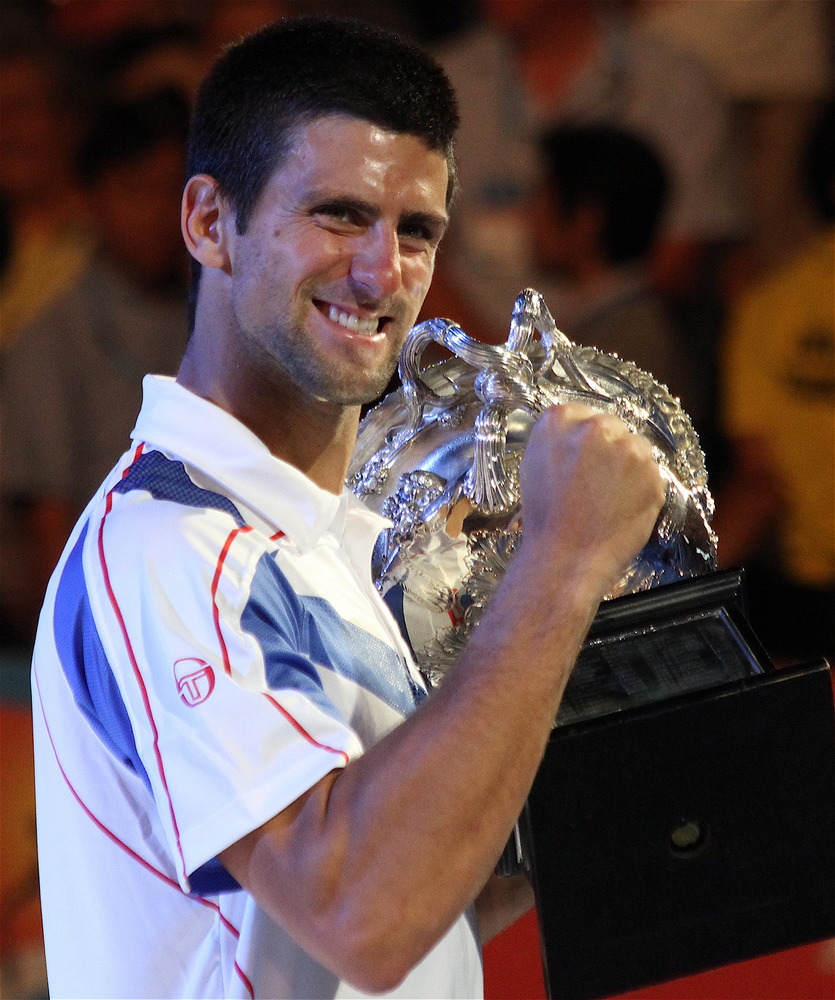 His triumph over Federer at the Wimbledon final was one of the most awe-inspiring performances ever. He held his revamped serve until the fourth set. He repeatedly nailed returns of serves which Federer painted on corners; he scrambled side-to-side chasing down balls kicking up dust on the lines; he rifled balls at Federer’s feet, forcing Federer to float two forehands and two slice-backhands wide at critical junctures. He repeatedly forced Federer into unwanted rallies that rank among the sport’s most memorable. And he did all of this after seemingly hyper-extending his knee on a hard fall early in the match.

In the end, Djokovic tasted the turf, held the trophy aloft in honor of his first coach, and cried tears of joy and relief after having lost 5 of 6 previous slam finals. Djokovic was the one who met royals backstage and emerged onto the balcony to hoist the trophy above a delirious crowd.

Yet many fans and pundits are still talking about the rejuvenated Federer spreading stardust around Centre Court with his jaguar movement, 29 aces and epic comeback from match point to win five straight games in the fourth set. Even in defeat, the loudest applause was for Federer.

None of this seems to get to Djokovic. Djokovic seems to feed on his underdog status with the zeal of Serbian holy warriors who see themselves as eternally valiant victims of history. He’s constantly under attack, surviving on superior mental fortitude and spiritual belief in his destiny. He patrols his side of the court as if it’s the cradle of Serbian civilization, and he lets no man enter and pass without a fight. 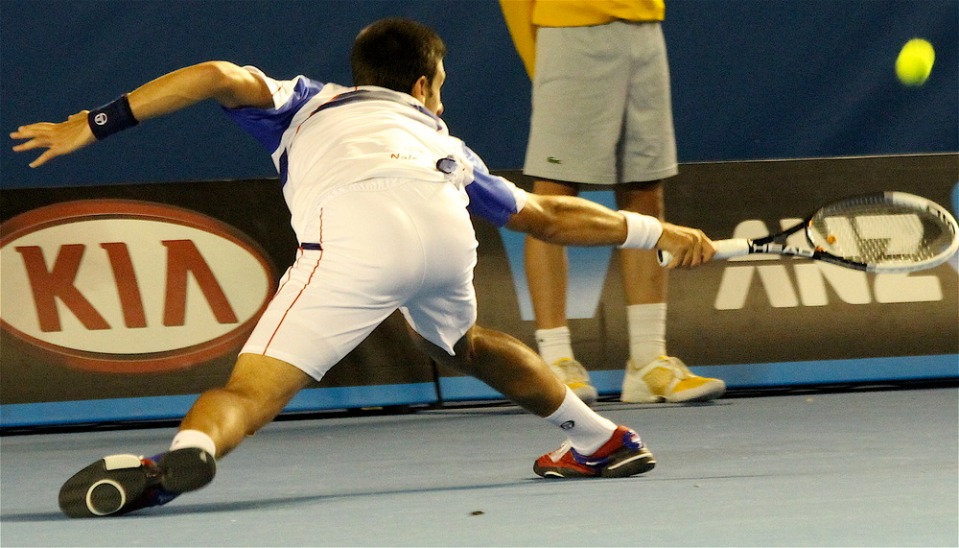 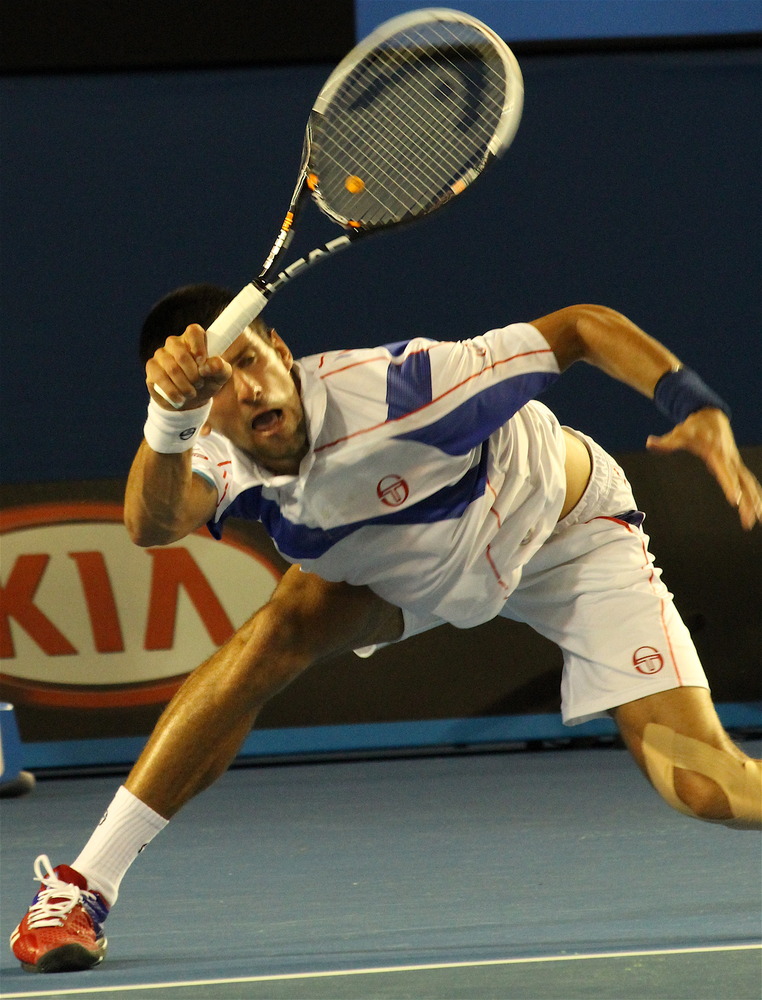 While other players have weapons in the form of serves or forehands, Djokovic’s weapon is his physical conditioning and Gumby flexibility. He won the longest grand slam final ever, beating Nadal in Melbourne in 2012 in 5 hours and 53 minutes. He typically looks injured or down and out in a match, only to prevail in five-set marathons that have become his calling card on tour.

You can imagine Djokovic imitating this line: “I gotta get in shape. Too much sitting has ruined my body. Too much abuse has gone on for too long. From now on there will be 50 push-ups each morning, 50 pull-ups. There will be no more pills, no more bad food, no more destroyers of my body. From now on will be total organization. Every muscle must be tight.”

After receiving his trophy Sunday, Djokovic spoke at length about his inner world and philosophy of life.

“When I lost the fourth (set), momentum shifted on his side. I just needed to find the right purpose, find the last drop of energy. I needed to refocus and find the right purpose, find that inner strength, that last drop of energy, inspiration. Try to be aware of the moment, be aware of the occasion, aware of where I am playing the 5th set of the Wimbledon final. I went to the rest room after dropping the 4th set. I chatted with myself. I was loud to myself. ‘Believe in yourself’.”

“It’s not a cliche. It really works. Even when you don’t feel it at times, to say some positive things to yourself, is actually when you should do it.”

“I’m not here to preach about wise and right things. But it works for me.”

“(I thought about) everything I’ve been through. You live for these moments as a tennis player. You practice. You try to find inspiration. Trying to visualize being where you are. I just had a blast from the past. Everything my team has been through. All the suffering. And of course in the end of the day, imagining my future family, my fiancee who I’m marrying soon, she’s six months pregnant. Just imagining my future family. I wish that my baby could have seen that. I make sure that I’ll feel more inspiration in future years, so that baby can clap and see daddy win. I’ll make sure I’ll have everything on tape, and we’ll go through that after a few hours of cartoons.”